While they don’t actually fly, flying fish use their wing-like breast fins to glide through the air. The waters around Yakushima are rich in flying fish, and the island boasts the largest catches of the fish in Japan. Flying fish, known locally as toppyo or toppi, have been a part of life on Yakushima since olden times, and it is a popular food fish year-round.

The season for flying fish on Yakushima runs from April to June. Flying fish are highly athletic, so their meat is dense, low in fat, high in protein and low in calories. Fresh flying fish have a firm texture, which makes them good for sashimi, but the tsukeage, or deep-fried minced fish, is so popular both at home and as a souvenir that there are stores on the island specializing in it. 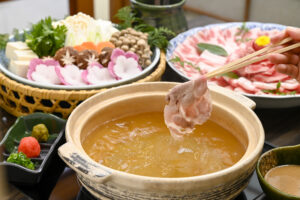 Kurobuta Pork
The richly flavored pork is a popular local delicacy even for travelers from other parts of Japan.